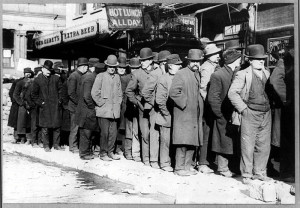 The Department of Veterans Affairs (VA) proudly advertises that the disability claims backlog is now under control.  Under Secretary for Benefits Alison Hickey has stated categorically that VA’s goal is to eliminate the claims backlog by the end of 2015 – “meaning all Veterans will receive timely and accurate decisions on their disability claims.”

How is this miracle possible?  The answer is, it’s not possible.  VA is not offering timely and accurate decisions on disability claims.  Here is how they are really addressing the claims backlog:

Conclusion:  There’s no line anymore – because we closed the store.

Conclusion:  Deny claims.  That does move claims files along quickly.

Well – wrong is wrong.  VA will never be forced to really clean up its act until Veterans insist on their rights.  If your claims have been denied, don’t be part of the vast majority who let VA get away with it.  Appeal!

Appeals are important for many reasons.  First, you are entitled to accurate assessment of your disability.  Second, VA’s claims-review error rate is so high you almost have to appeal.  Third, VA might accurately deny claims based on the law as they understand it – and the law may change.  Finally, as is notoriously the case with tactical herbicides such as “Agent Orange,” VA may be forced to acknowledge service-connection to a host of terrible ailments and offer presumptions of disability.

You Are Entitled to Representation.  It won’t surprise you that it took an act of Congress, Public Law 109-461 (December 22, 2006), to allow Veterans to have representation at appeals hearings before VA.  Prior to 2007 – when the law was finally implemented by VA – Veterans were on their own.   Lack of representation created a dramatically unfair situation, of course.  Veterans aren’t students of VA policy and practice, nor are they students of every law ever passed that might impact their benefits.  No wonder the appeal rate has been historically low.  Who would want to face all that bureaucracy by themselves?

Appeal Is a Right.  It’s only been a few years since Veterans were finally allowed to have an advocate assist them with appeals.  If your claims have been denied, get assistance with that NOD.  Do not take “No” as an acceptable answer from VA.  Know your rights and demand the benefits you have earned with your service and sacrifice.

Public Law 109-461 allows Veterans to hire attorneys to appeal VA benefits rulings.  The Law Office of Robert B. Goss, P.C. is one of the few VA-accredited Veteran attorney firms in the United States.  Contact https://www.attorneyforveterans.com/contact-us.html  today for your FREE consultation.